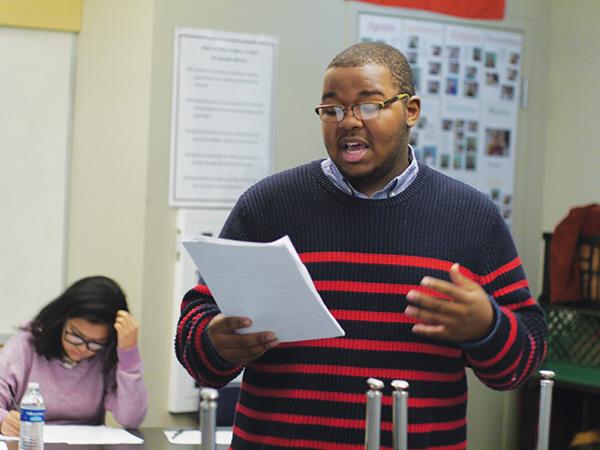 Words for the Wise

Jacob Adams reads from a prepared sheet while debating at Eastside College Prep.

Upon stepping into room 110, the sharp, commanding cadence of Jacob Adams’ voice is immediately noticeable. With the poise of a preacher and words that hang heavy with meaning, Adams spits his sermon to a lone judge, accompanied only by dim lights, stacks of chairs and his opponent.

It is an unseasonably cold Saturday morning at Eastside College Prep in East Palo Alto and Adams, along with 20 or so other high schoolers, is at debate practice. He does not have to be here; today’s workshop is optional. Even more telling, he is a senior and today’s subject — governmental surveillance and the war on drugs — will not be used in competition until after he has graduated. Regardless, Adams tackles the topic of surveillance like his life depends on it.

As a member of the eight-month-old Silicon Valley Urban Debate League, he represents everything that league founder Jennie Savage and Dmitri Seals hope to see in their students. SVUDL, in turn, characterizes the dream of a debate aficionado and political activism enthusiast: a chance to build within underprivileged urban youth the invaluable skills of speech, critical thinking and self-efficacy.

Urban Debate League: A User’s Guide
How does one build a successful urban debate league? Savage and Seals have a formula, though it is far from simple. They start with a community that struggles, one where the schools are underfunded and the kids drop out like water slipping through a leaky pipe, where the young adults are arrested for stealing and dealing when they know no other way to support their families. They believe in this community, invest in it and hope it can change.

The next steps are beams laid upon this foundation of trust: Savage and Seals solicit coaches, teachers already engaged neck-deep in the classroom. They talk with the principal and convince him or her to create a partnership with a nonexistent debate league. Added on are volunteer mentors, experienced debaters who will come teach these kids for free. And not to be forgotten are the kids themselves. After all, it’s no guarantee enough students will show up to even field a team.

At this point the framework for the league is in place, and yet there is still so much to do. Student captains must be appointed within the first two or three months, and other schools must be contacted, sister programs set up, donors convinced to lend support, more teachers and principals and students and debaters roped in. Will this creation stand strong, or crumple in the first breeze that passes by? Only time can tell.

In 2008, Savage and Seals helped found the Bay Area Urban Debate League, based in Oakland. Starting with only 24 members in its first year, BAUDL grew to a nationally competitive powerhouse that now encompasses 14 schools and 600 students. The program has spun more than a handful of intellectual rags-to-riches stories, such as that of Rashid Campbell, who attended his first practice after seeing a flyer on the street, drawn solely by the possibility that there would be food. Debate turned Campbell’s life 180 degrees; he is now a national award-winning debater with a full ride at Oklahoma University.

To Seals, who never debated himself, the program has shown to be an incredible source of academic transformation for urban youth.
“I [realized] that it [debate] could take someone with a fifth grade reading level to the place where they could write a 25-page college essay,” Seals says.
As of nine months ago, Savage and Seals have begun work to extend these opportunities to high schoolers in Silicon Valley. It’s safe to say the bar for SVUDL has been set quite high. 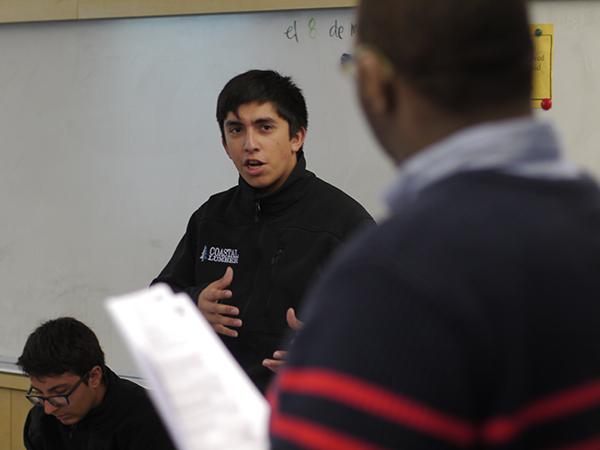 SVUDL
“To bring the transformative power of debate to schools that wouldn’t have it otherwise.” This, Savage says, is the motivation for starting an urban debate league in Silicon Valley, an area that, despite its overt wealth, houses many latent pockets of poverty. Still in the process of construction, SVUDL currently comprises two pilot programs, one at Eastside and one at Overfelt High School in San Jose; eight more high schools remain on the wait list.

The high demand can not only be attributed to the deep coaching experience of Savage and Seals, but also to the strong leadership team they have assembled. From coaches and mentors to donors, SVUDL can promise a support system of people who both care and are knowledgeable about debate.

Take, for example, Stanford student Thomas Choi, a freshman working with the Stanford Youth Debate Initiative. As one of about a dozen Stanford students in SYDI, Choi helps mentor young debaters from underprivileged schools around Silicon Valley, such as those at Eastside and Overfelt.

“I was lucky enough to have an older sibling walk me along the path of debate,” Choi says. “It’s only right to pass on those skills with people who don’t have that opportunity.”
Or look at Palo Alto High School debate alumnus and former chief engineer of Facebook Jocelyn Goldfein, who is now giving back to SVUDL as a donor.

“Speech and Debate has been hugely formative in my own life,” Goldfein says. “With all my advantages [growing up in Palo Alto] I still felt that debate gave me a huge hand up in terms of leadership, communication, storytelling, thinking on my feet, making my voice heard and having the will and drive to succeed no matter what. I look at the arc of my career, and I don’t think it would have been possible without that formative experience.”

This solid framework, well-steeped in debate, has SVUDL on an upward trajectory. Currently, practices are held once a week at Overfelt and twice at Eastside. Once a month, a workshop is held for both schools, giving the students an opportunity to practice debating against fresh faces. Seals hopes to add a monthly tournament, as well as more schools, to the cycle by October. The program is small now, but given some time it could stand as a national contender, 600 strong, straddling a corner of the bay opposite BAUDL and striking fear into the hearts of privileged powerhouse schools.

“I’d like to see Bellarmine students quake in their boots just a bit when they find out they’ve got a tournament match-up against Overfelt,” Goldfein says. 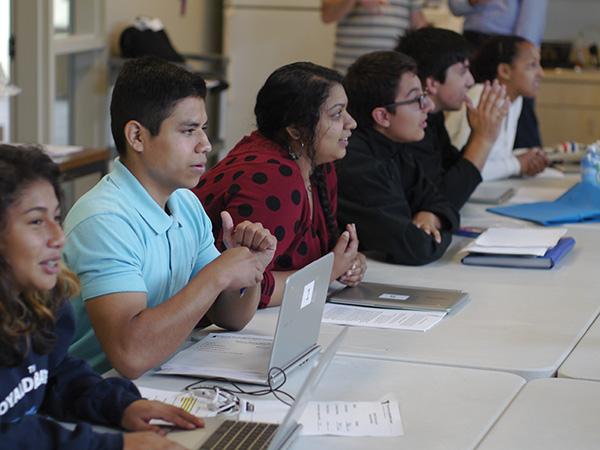 Students from Overfelt High School take notes during an example debate round between coaches.

The Transformative Power of Debate
Adams lies at the crossroads of nature and nurture, a product of both lineage and schooling. He has powerful speech in his blood, hailing from a family of preachers and rappers. In four years at Eastside, Adams has learned to channel this voice into strong and compelling debate; he likes to show what he has to say and does so with confidence and authority.

This talented team captain was almost not to be; Adams grew up in Oakland and likely would have ended up in public school playing football had his grandmother not pushed him to apply to Eastside, a boarding school, in eighth grade. Still, on his first day, Adams arrived red-faced and teary-eyed out of fear. It was not until he started debate that the future team leader began to emerge.

“I feel that debate has helped me refine myself as a speaker and as a person,” Adams says. “You have to be organized and have your act together, or no one can understand you. And it always helps to have an organized argument when you’re talking.”

Before Eastside joined SVUDL, Adams was one of only two students on the debate team. Despite the limited resources, he managed to grow by leaps and bounds. A crowning moment came during his junior year, when he and a partner won a tournament at Presentation High School. Suddenly, the bleary-eyed freshman was looking down the other end of the telescope.

With the influx of opportunities provided by SVUDL, stories like Adams’ are looking to become a more consistent reality. In the eyes of Savage, debate represents a truly unique outlet for students, one that a traditional educational environment does not provide.

Nevertheless, no one said starting, or running, an urban debate league was easy. The gains are not all made in leaps and bounds, and not every story has a happy ending. Seals will be the first to tell you how difficult the process can be — you can have the best coaches in the world and students will still fall through the cracks. And yet, for those who do succeed, the reward is that much sweeter.

“Let’s think about someone starting out with the deck stacked against them,” Goldfein says. “A system and a set of stereotypes that tell you, you can’t achieve academically, school is not for you, people in your family or your community don’t finish school. That system engenders hopelessness — and that’s when you most need conviction. With hard work and a little support, you are capable of anything.”