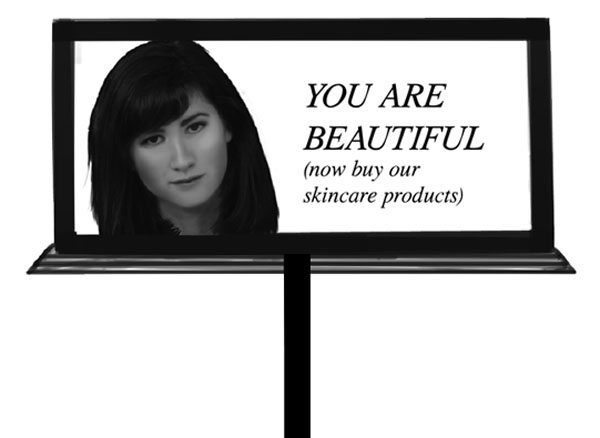 Yesterday I watched a short film titled “Selfie,” in which pairs of mothers and daughters discussed their physical insecurities and then took selfies in order to better understand their beauty. These selfies were hung in a gallery and people walked around putting sticky notes with compliments on the blown up photographs; One girl had “beautiful teeth,” another, “nice hair.” These women now understood their true beauty, what you might call their “Real Beauty,” a term coined by Dove toiletries, maker of the video.

I immediately imagined myself starring in this short film. Subdued, yet inspiring music would play in the background. People I didn’t know would tell me their favorite parts about my physical appearance. And then, I too, would feel beautiful, ready to take on the world with my socially-approved exterior.

Advertising campaigns that capitalize on the idea of self-love are frequently used by companies that actually make money off women’s lack of confidence. The hypocritical marketing tactics that attempt to manipulate women into buying products are not only ridiculous, but actually reinforce ideas the very ideas of traditional beauty that they are supposedly trying to dispel.

The previously mentioned Dove “Real Beauty” campaign has put out multiple short videos; some widespread examples include the “Evolution of Beauty,” “Dove Real Beauty Sketches” and most recently, its short film “Selfie.”

Confused by the conflicting messages in these supposedly empowering videos, I went in search of an expert. Peggy Orenstein, a journalist and author of  books about female self-esteem and confidence gave me her take on the “Dove problem.”

Orenstein told me that while she sees some benefits to the videos, they still suggest that your physical appearance comes first.

“They hadn’t changed the idea that your appearance is what is more important,” Orenstein says. “[The videos’ message is] how you look is super super important but maybe we can stretch it a little bit.”

Instead of challenging the definition of beauty, they merely tweak it.

These inspirational videos, or cleverly disguised advertisements, depend on virality for their success. They place the focus on an abstract idea of beauty that all women should aim to achieve, despite their flaws, instead of loving themselves because they are beautiful in their own right. The women love themselves not because of some inner realization that they are uniquely beautiful, but rather ,because a stranger told them they have nice arms.

By attaching itself to an idea we all want to believe — that we are beautiful — Dove benefits from an abundance of advertising advantages. Instead of paying for airtime, women (and men) of all ages post and send these videos, creating a viral effect. Without fail, every time one of these videos comes out, my friends and family excitedly send me the link, familiar with my interest in female empowerment and activism. My Facebook newsfeed fills up with various posts of the video with captions ranging from “Check it out!” to “This changed my life.” The distribution tactic used by Dove makes the advertisements feel less like, well …advertisements, and more like short films truly aimed at affecting change.

The great irony is that these videos do not actually want to affect change. In its first video, the Dove Real Beauty campaign took a photo of a normal woman and showed the process of photo altering that goes into creating a billboard. Dove does not want you to tear that billboard down; it wants you to think you look like it. The very core of the Real Beauty campaign is the idea of “being beautiful,” physically, not internally.

Instead of teaching women the importance of other adjectives like “intelligent” or “creative,” the campaign focuses on a conventional definition of beauty, because beauty sells.

In the age of Buzzfeed and “This video will make you cry so hard you’ll punch yourself in the face,”  we have to be careful about who is sending the messages. If an oil company created an uplifting video about fish swimming in petroleum, we would think twice before pulling out a box of tissues and clicking the share button. We should be similarly cautious about the Dove campaign. 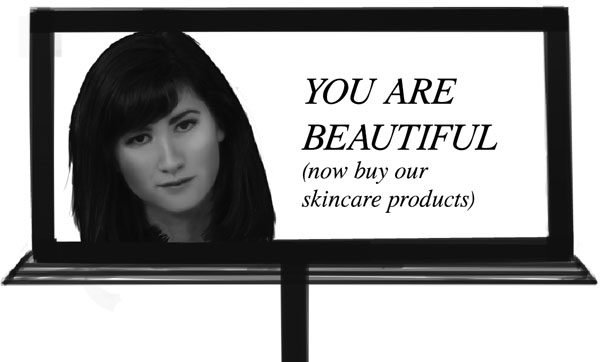