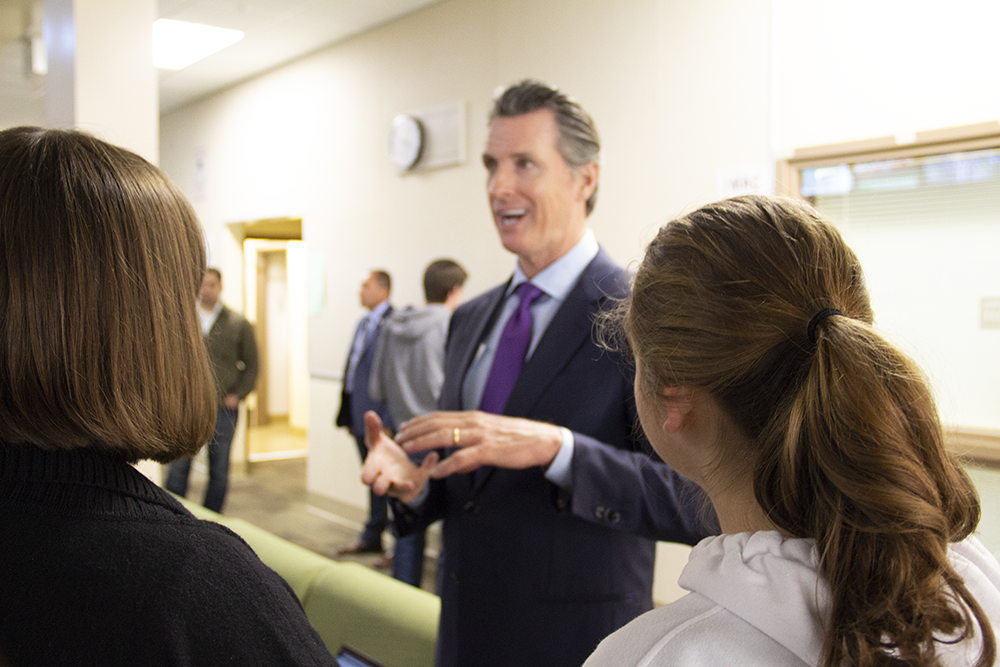 Newsom first addressed a room full of students from The Campanile newspaper and staff members from various other publications — Verde magazine, The Paly Voice and C-magazine — answering questions for more than an hour during seventh period.

A “personal friend” of journalism teacher Esther Wojcicki, he said he came to Paly because he has connections and works with many Paly graduates.

“I have all these staff that are graduates from here [Paly], which is crazy,” he said. “My deputy chief of staff, my chief legal advisor, the head of OPR — which is my Office of Planning research which is responsible for linking transportation, economic development and global warming issues…  So kind of three of the more powerful poor people in my office all came from here [Paly].”

After the final bell rang, Newsom and Wojcicki spoke further in private. Newsom appeared one more time and took final questions from a remaining crowd of student journalists and staff members.

The following are highlights of various topics Newsom addressed throughout the afternoon. 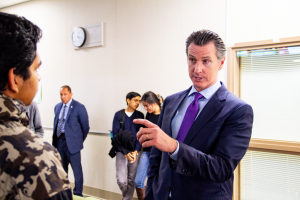 Newsom speaks to Verde reporter Rohin Ghosh about his early support for presidential candidate and California Senator Kamala Harris. Newsom says that they are longtime friends and he admires her charisma and grit. “I’ve known her for 25 years,” he said. “We were friends before she became D.A. [district attorney] and before I became mayor.’

In response to one of the first student-posed questions, Newsom addressed California’s highly publicized high-speed rail project, which he said needed amending to decrease its cost during his Feb. 12 State of the State speech. The project’s challenges have ranged from legal disputes to Tuesday’s announcement from the Trump administration that it was canceling a $929 million federal grant allocated for the project.

“It’s amazing how you go around the rest of the world they’re using high-speed rail systems and for half a century, America doesn’t have one,” Newsom said. “In 2010, we got $3.5 billion from the Obama administration but in order to get that federal money, they said you have to build the Central Valley section and it has to be done by 2021. So we’re almost out of compliance and we’d have to give that money back, so in my State of the State, I announced that we’re going to just have to finish it.”

According to Newsom, only $20 billion of the needed $100 billion of funding has been secured.

“We had to re-prioritize getting a segment done and so I just announced we’re getting that segment done and we’re going to pursue more money but in the process of announcing that we don’t have all the money,” Newsom said.

On the same day the Trump administration cut negotiations with California state officials over regulations on greenhouse gas emissions, Newsom maintained that he hopes to work with Trump to accomplish what is best for California and the nation in terms of cutting back on carbon emissions.

“I think what you need with President Trump is, you’ve just got to do what you got to do,” Newsom said. “You’ve got to meet him where he is. But this emissions issue is bad right now. You guys care about clean air, clean water, your health, you care about the planet. We have goals to get to 100 percent renewable energy by 2045 and there’s no way we’d come close without having the highest fuel efficiency standards in America, and he [the president] is literally trying to take that away as of today. I think my strategy is, ‘What do we need to do to convince you that this is not good for the auto industry?’”

California as a trailblazer

According to Newsom, the precedents California sets in legislation often heavily influence the rest of the country.

“It’s such a rogue cliche thing: ‘As California goes, so goes the nation,’ but it’s like a fact,” Newsom said. “I know it’s like one of those things people say, but it’s a fact. I mean the future happens here first. America’s become attractive in every way, shape, or form. I’ll just give you an example: 27 percent of the state is foreign-born. That’s insane. It’s awesome. We brought in 115,000 refugees in the last decade.”

“It’s such a rogue cliche thing: ‘As California goes, so goes the nation,’ but it’s like a fact. I know it’s like one of those things people say, but it’s a fact. I mean the future happens here first.”

Newsom said his funding initiatives addressing a lack of housing were written to provide autonomy at the local level, adding that local governments would therefore have more authority to dedicate the funds toward teacher housing.

“We put one billion dollars up of money … that give discretion for cities and counties to prioritize what kind of housing they feel is most important — the missing middle workforce housing or the low-income housing,” he said. “That will allow them to be dedicated for teachers, for essential services, particularly for public safety.

He says his efforts have already yielded an unprecedented amount of money through the private sector and non-profits to provide for the creation of housing and he plans to continue reaching out to other corporate leaders to match the amount of money raised.

“Two weeks ago, the Chan Zuckerberg Foundation announced their efforts to put half a billion dollars up, and Facebook put in — with Genentech — $260 million, so they’ve already raised $262 (million) to their $500 million goal,” Newsom said. “Now we’re reaching out to other corporate leaders to get another half a billion dollars.”

By matching tax funds allocated toward housing with donations from the private sector, the state will maximize relief efforts, he said: “It’s an unprecedented amount of money that we put in for local housing initiatives. We’re hoping to match that billion dollar contribution with a billion dollars of corporate contributions to leverage the state’s efforts.”

Newsom said his plans to address the achievement or readiness gap, as he called it, focus heavily on early childhood development.

“I think there’s a readiness gap. I don’t think people are left behind, I think they start behind,” he said. “We do a terrible job as a state preparing our kids to be learning-ready when they enter into kindergarten.” 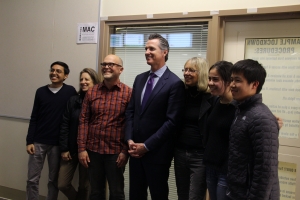 He said his plans include increased prenatal support for families and higher quality preschool programs.

“Those gaps start at birth.  Eighty-five percent of the brain’s formed by the time you’re three years old.”

That being said, he also recognized adolescents who did not receive early supports and may be struggling as a result.

“For those that don’t have the benefit of that early support … you don’t give up on them,” Newsom said. “That’s why I’m here today to learn about how to close that achievement gap by sharing best practices, spreading best practices, individualized learning, making sure we’re culturally competent are the way we approach things, making sure we meet you where you are making.

As a student who had “severe” learning disabilities and struggled academically, Newsom said he understands that each student is unique in educational needs.

“One size does not fit all,” he said. “You’re not just … rows of desks and you’re not all here based on your data manufacturer. … We have to actually begin to customize your life’s experience in a way that meets your unique expression

Also after his meeting with Wojcicki, Newsom said that his decision to endorse California Senator Kamala Harris for the 2020 presidential election was based on a previous positive professional relationship.

“I’ve known her for 25 years,” he said. “We were friends before she became D.A. [district attorney] and before I became mayor.’

He said that her charisma, idealism and past experiences make her his top presidential candidate for the 2020 election.

“She, I think, has all the ingredients,” he said. “She’s charismatic, she’s smart, she’s pragmatic. She still has a deep sense of idealism. She has really interesting life experiences. All those things blended together or made it [the endorsement] easy for me.”

Newsom told students he encourages them to explore ways of making change happen that do not necessarily involve being a politician.

Newsom was handed a stack of Paly student newspapers and magazines, including the newest issue of Verde Magazine, which covers topics of the city’s controversial President’s Hotel evictions, RV campers on El Camino Real and the Early Childhood Development program at Paly. He also mentioned he noticed Verde’s articles about the school K-Pop club.

Newsom left the building at just after 4 p.m. with his security team.