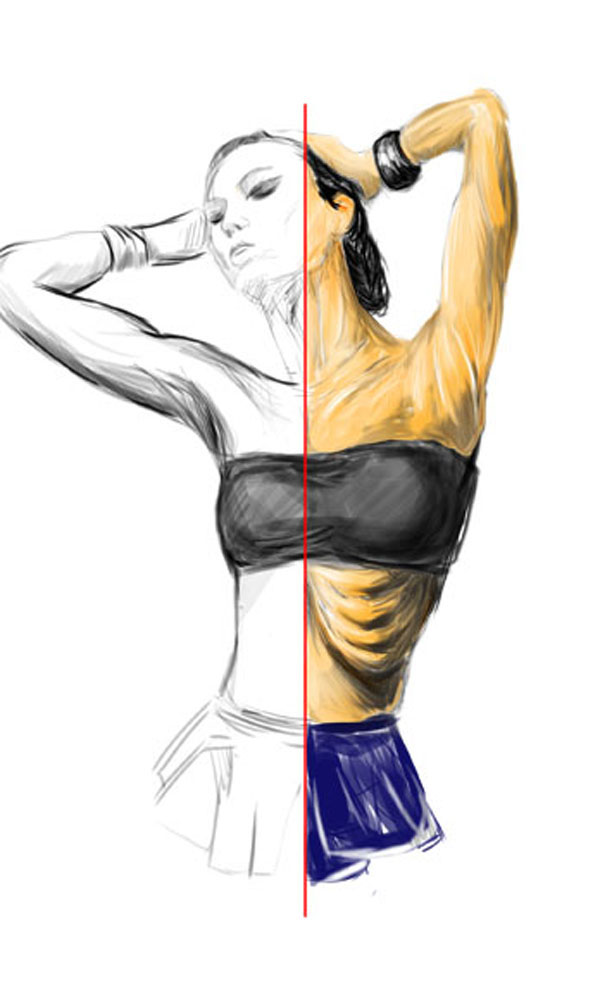 Dangerously erasing the evidence of the media’s algorithm for beauty

Magazines have admitted to retouching emaciated models to make them appear healthier.

They tell us that we can never be too skinny, that a woman’s true value depends on the circumference of her waist and that we can never be good enough. At first, the philosophy was to trim down the natural outline of our bodies; now, they are slyly painting layers back on.

In nearly any modern magazine, a bombardment of skinny models and the work of editors and photographers compound to create as “skinny” an image as possible. We know these pictures: a child’s waist between a woman’s chest and hips, slender arms, separated thighs and mile-long legs all topped with a perfect commercial face. They are so much a part of our vocabulary — what we review in our head when we discuss beauty.

People have long criticized the media for the distorted image of beauty it creates. It has thrust upon our society this unrealistic image that engraves itself in our minds, leaving an unhealthy idealization of beauty.

The editing of pictures is nothing new to the beauty industry, but in recent years the effects of retouched pictures have compounded and awareness has grown, so we’ve seen open criticism of retouch practices. Several high-profile magazines, such as Cosmopolitan, Vogue and Healthy, who were previously criticized for editing models’ curves away, are now slyly facing the repercussions of their original editing practices. They have admitted to retouching emaciated models to make them appear healthier.

“At the time, when we pored over the raw images, creating the appearance of smooth flesh over protruding ribs, softening the look of collarbones that stuck out like coat hangers, adding curves to flat bottoms and cleavage to pigeon chests, we felt we were doing the right thing,” wrote Leah Hardy, a former editor of Cosmopolitan magazine, in a recent exposé on the magazine’s editing practices published on Daily Mail Online.

The media has created a spiraling cycle of negative body image — aspiring models starve themselves to be as skinny as the unrealistically edited models they see, eventually becoming so waiflike that they must be edited just to look alive. But more dangerous than the effects of this cycle on the modeling industry are those that plague on everyday people who are told time and time again to look like the images they see, particularly in a culture already addicted to critiquing women’s bodies.

Released images of un-retouched models from various magazines reveal the zombie-like horrors that life-threatening disorders cause — a fully exposed rib cage, hollow cheeks, limp hair and lifeless, pale skin, to which editors strategically added weight and glow, effectively bringing the girls to life and covering up the ugly reality of unhealthy eating habits.

When a barrage of these images assault us daily, it is far too easy to fall into the false assumption that one can have a waist as thin as a child’s while also maintaining a glowing complexion, full hair and a soft, womanly shape. While the trend to have no curves at all is no longer in fashion, its replacement by the ideal of an unachievable body which combines the “good” aspects of skinniness with “womanly” curves is no better. It advocates a deeper hypocrisy and silenced nature of the true effects of unhealthy skinniness.

According to a National Eating Disorders Association (NEDA) survey, 40 to 60 percent of elementary school girls are “concerned” with their weight, and over 30 million Americans will suffer from an eating disorder at some point in their lives. Our society fuels the alarming growth of these statistics by passively accepting the media’s presentation of dangerous images.

Although we cannot control the practices of certain magazines, we can decide how we choose to view media that continuously presents frighteningly false portrayals of women’s bodies. Motions like The Representation Project and the recent Aerie lingerie advertisements displaying unretouched women are already working to shift the public consciousness toward the unjust portrayals of both genders in the media.

The primary reason magazines feel the need to retouch photos is to sell; to present what they believe their readers find beautiful. But we are the readers, and we can decide to become aware of our distorted perception of beauty and work to amend it.

We deserve for magazines to make it clear and understand that they have influential power. They cannot keep ignoring that they are failing to address their errors by continuing to patch up the damage they’ve caused.

By avoiding media that is known to retouch women’s bodies and directing attention to fair portrayals of realistic and diverse women, we can send the message to companies searching for profit that we will no longer sit idly by when it comes to how our bodies are displayed. Although a long process, with unified effort our culture can redefine “beautiful” to mean real confident women of all shapes, colors and sizes, not the layers of paint that editors first removed and then unapologetically added back on.