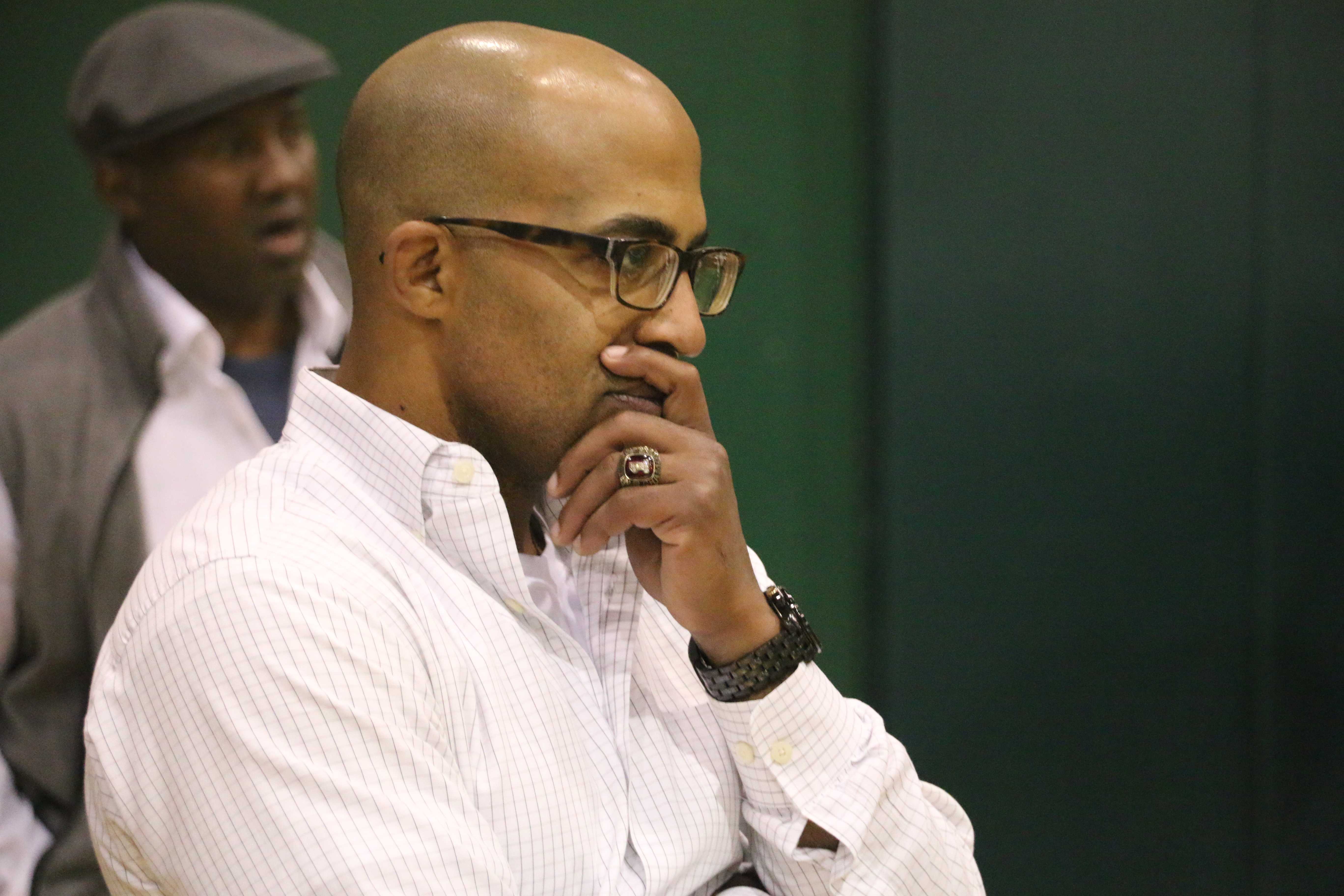 Creighton’s World: If You Have A Fire In Your Heart, He’ll Make It An Inferno

There is a place at Palo Alto High School where most students will never once venture in their four years — a place most may not even know exists. Behind the upholstery room, with its torn couches and hanging sheets and drapes, lies the domain of Braumon Creighton, the new head wrestling coach. For all its lack of glory, this strip of mat — what constitutes the wrestling room at Paly — has become something of an autocracy. Here, a suggestion is a demand and a question is always rhetorical. There is a pecking order, and everyone knows who the top dog is.

Like a pastor, Creighton preaches in a loud, clear voice that is neither rushed nor hurried but fills up the room to make its point. He pauses every few words, speaking with supreme self-confidence and moving in the rhythm and swagger of a champion athlete. His sermon, as always, is on wrestling.

“In my day we used to talk a lot about fights,” he tells the dozen or so sweaty young men and women seated in front of him during a rare break in the drills. “But there was always one guy that people would say, ‘Oh, don’t fight him, he goes psycho. He goes crazy.’”

“Well guess what? Going crazy means nothing in wrestling. It won’t help you.” He looks around at each wrestler to make sure they understand.

“Position will dominate action,” he continues. “If he’s on top of me, and he’s got two hands on my wrists, it doesn’t matter how much action I do … he has me. You gotta fight for position. You can’t just spazz out. You gotta fight smart.”

By this point, the wrestlers are well through the exercises — the lunges, backwards push-ups, forward rolls, hand stand rolls, quad jumps, push-ups (they’d better be real ones) — and now have moved on to their drills. They begin to shuffle and dodge and dive, each in their own world, a group of shifting atoms moving around Creighton’s nucleus as he stands in the center of the mat and observes.

“You don’t have what I have,” he says. “You’re going to get tortured next year [in college wrestling].”

Soon, the wrestlers are on to harder moves, trying to master the “high crotch,” and there is the constant dull percussion of bodies slamming into mat.

Creighton tells the team they need more tenacity, that the drills are going too slowly. Some of the wrestlers are having trouble with the move, and Creighton offers several corrections which are not implemented effectively. Finally, he takes a kid aside.

“Good, ‘cause I’m not just saying this for my health,” Creighton tells him.He watches the kid attempt the move again and nods ever so slightly. “Better.”

The Making of a Wrestler

Creighton grew up in Nebraska, his father a former college wrestler who channeled his unfulfilled dreams into his son. Creighton quite literally had wrestling thrust upon him from birth, as family gatherings inevitably ended with everyone heading down to the basement to watch him and his cousins wrestle. He won his very first match in kindergarten, against an opponent two years older, and didn’t lose once until fourth grade. He still remembers the name of the second grader who beat him, David Kilgaard, and he would continue to follow Kilgaard’s wrestling career. Creighton left that match devastated. He didn’t step on the mat again for three years.

In high school, Creighton lacked self assurance in his own abilities, despite having more wrestling experience than most. There was a fear that crept in each time he took to the mat — the fear of losing, yes, but the fear of winning too, because then he would have to win more. It was the fear of failed expectations and humiliation synonymous with the name Kilgaard, a fear neither Creighton’s father nor coach could alleviate. Only his mother, who knew him best, realized what he needed.

During Creighton’s junior year, he was forced to skip part of the season for a shoulder surgery, and in this time she gave him a book which changed his life. “Mental Toughness Training for Sports” flipped a switch for Creighton. The kid who used to pray he would get in a car accident on his way to practice now found himself able to control the fear. Before, he had held back, afraid to try his very, very hardest because if he did that and still failed then what would that say about him? He learned that he would need to let go of being good to become great. Around this time, his father took him to see the National Championships, and Creighton watched in awe at the gladiator-like glory to which the wrestlers took to the mat. This was a new stage of wrestling, and he felt for the first time a desire taking shape within him.

He began to take mental preparation as seriously as physical fitness, visualizing his pins before a match even began. By senior year, he was untouchable, going 35 – 0 and claiming the state championship, which led to offers from several schools.

He chose University of Nebraska, Omaha, to wrestle Division II and vowed to become the winningest wrestler the school had ever known. Four All-American years and two national championships later he didn’t quite make his goal, but came close — the second winningest in school history.

There are only two options for a graduating college wrestler — the Olympics or coaching. Creighton chose the latter. For the past eight years he has taught as a middle school physical education teacher, where he seeks to recruit and train prospective wrestlers. Now, after two years of simultaneously assistant coaching for Paly, he is in the driver’s seat, right where he wants to be. 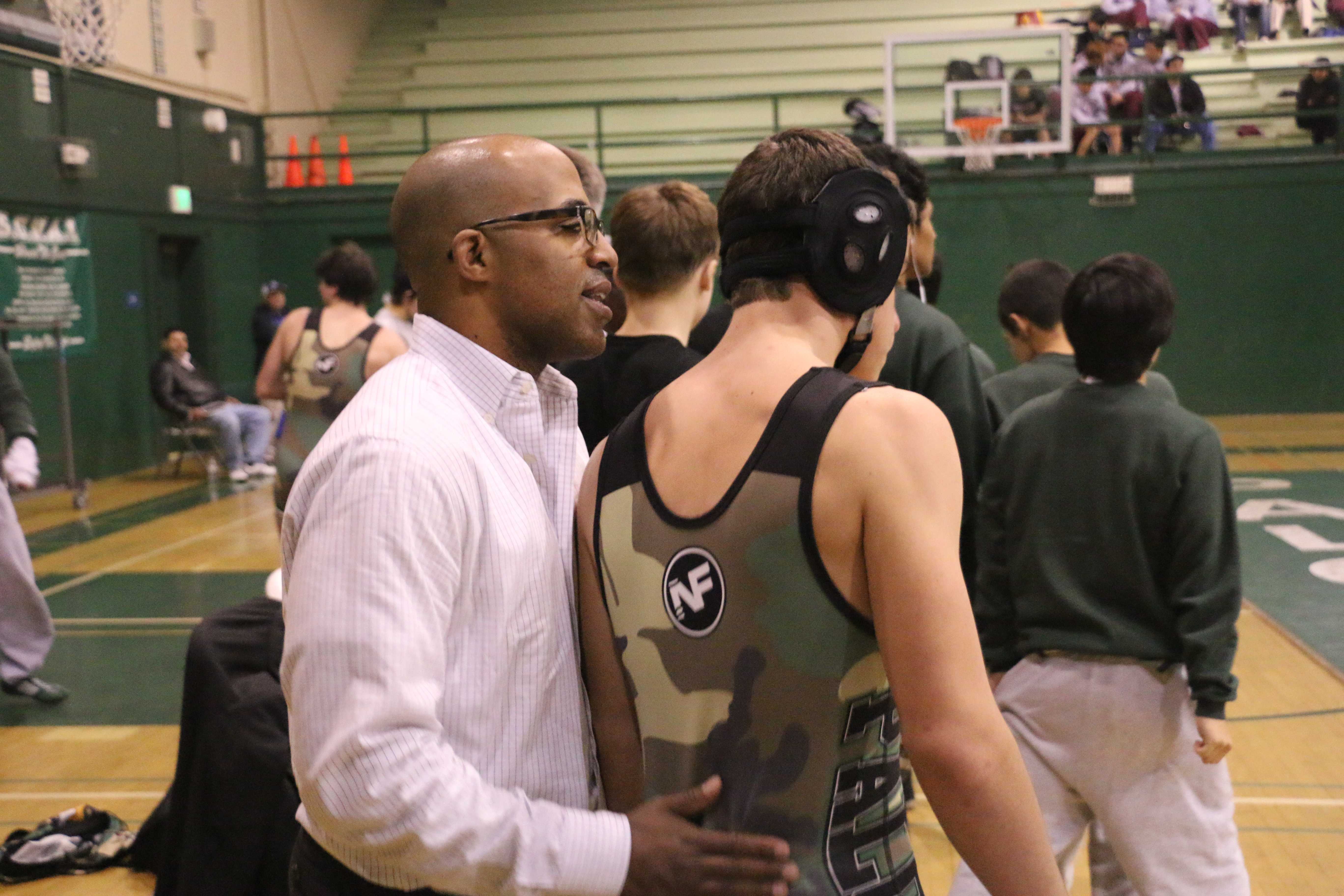 Creighton motivates a varsity wrestler before an upcoming match against Cupertino.

Creighton looks unusually dapper before the Cupertino dual, Paly’s third of the

season, having ditched his wrestling attire of sweats for a collared shirt, ironed black pants and his national championship ring. He is optimistic as he addresses the team.

“Each of you is better prepared now than you ever have been,” he says. “I think we could easily go out and win every match.”

But the Paly squad is already down 12 to zero before the dual has even started because they do not have a full team and have thus had to forfeit two weight classes. In a dual, each wrestler’s match can earn or lose points for the whole team. A pin is six points. A technical fall, in which the wrestler substantially outscores an opponent in terms of takedowns and moves, is five points. Lastly, a basic win (simply outscoring an opponent) is three points.

The JV team sets the tone for the match to come. The first two are pinned in quick succession and the third wrestler puts up a fight but eventually succumbs to the mat. “It’s like they’ve got magnets on their backs,” an assistant says to Creighton.

Goyal and Giaccia start off the varsity matches for Paly and both gain pins easily. Creighton is pleased — the school superintendent is watching. But things go downhill from there.

“Don’t you get pinned,” Creighton shouts at the third varsity wrestler. “Up to your feet, up to your feet!” Creighton is leaning over, almost pantomiming the moves as if to will the kid to victory. But eventually the wrestler is pinned. The rest of the matches follow more or less in the same manner, with a lone win somewhere along the line.

These sorts of matches can be frustrating for Creighton. At Paly, most wrestlers on the team are in their first or second year, and a disproportionate number are freshmen.

“It’s almost not fair to put a first-year varsity freshman against a four-year senior,” Creighton says. “You can be strong and fast and athletic, but you need to understand the techniques. It’s like learning a foreign language.”

By the end of the Cupertino dual, Creighton has sunk into his seat and left the shouting to his assistants. It’s the last match of the night, but Paly has already lost the dual. Freshman Richie Islas, who cut 10 pounds in just a couple days to make this weight, comes on to the mat. Within seconds, Ritchie swoops in for the high crotch. He’s vicious, swatting and pouncing with an energy that has evaded the rest of the team all night, and soon he’s got his opponent in his arms, picking him and slamming him into the mat. Creighton jumps to his feet. He is bouncing from side to side again, cheering Ritchie on ‘till the inevitable pin comes.

“That was the best performance of the whole match. The whole match,” he tells Ritchie, giving him a slap on the head.

Nevertheless, back in the wrestling room, Creighton is furious. The team gathers around, battered, sweaty and, save the four who won, mostly humiliated.

“I spend more time with you guys than I do with my own children,” Creighton concludes. “Am I wasting my time?”

When Creighton puts a kid on the mat, it’s his reputation and the school’s reputation on the line. The wrestlers can’t ever forget that fact. 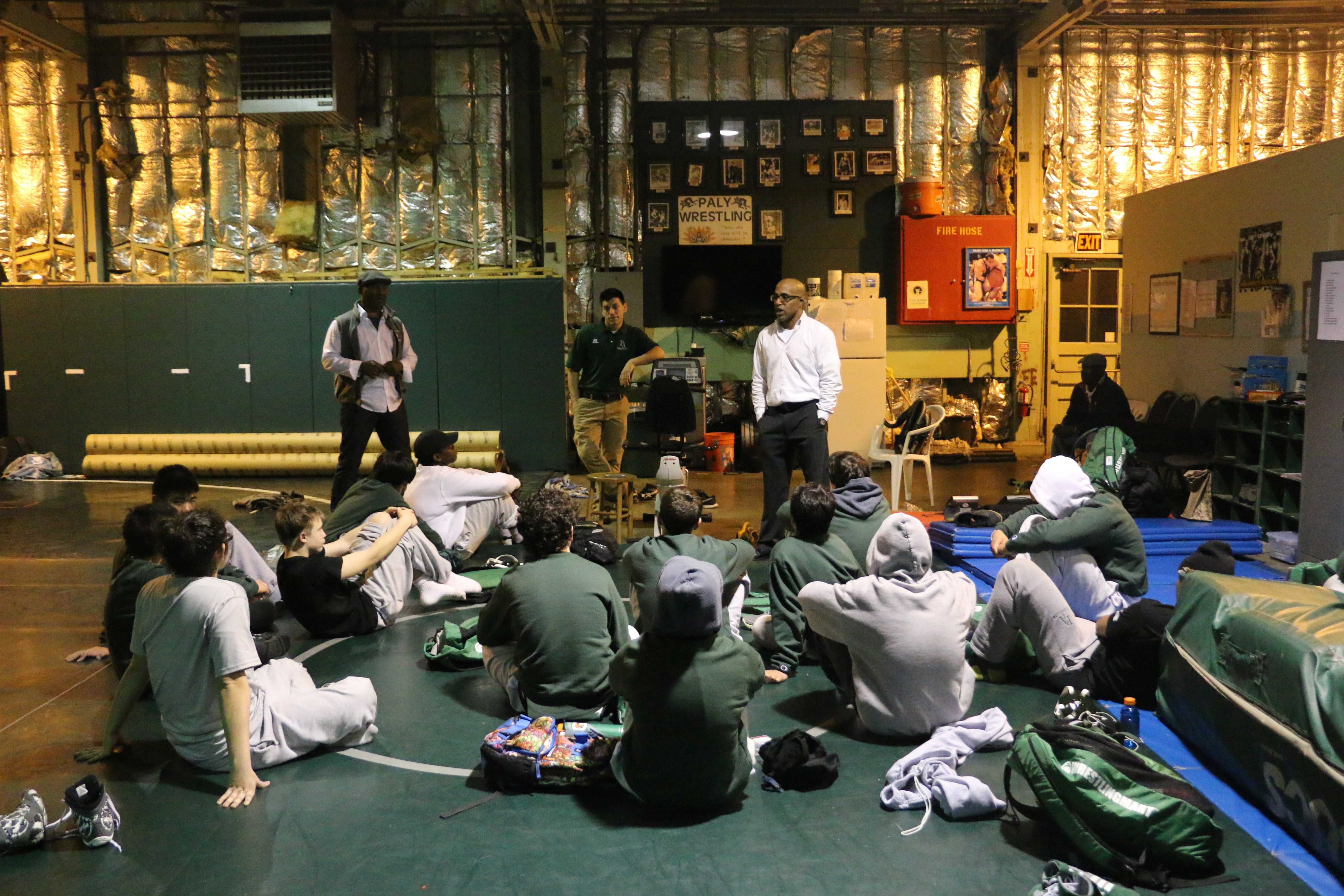 Creighton addresses the team after the loss against Cupertino.

The Paly wrestling team had lost every dual of the season as it headed across town to take on Gunn, a school with a full line-up of wrestlers, each in their third or fourth year, many trained in middle school by Creighton. Due to forfeits, Paly came into the match already down by 18 points, the equivalent of three pins.

Yet something must’ve been in the air that evening, Gunn’s senior night no less. It became apparent that the match would not be going as anticipated after a Paly freshman, TJ Murray, who had not won all year, threw down his opponent, a senior, and managed to stay on top for the rest of the match. Three points for Paly.

A few matches later, a JV wrestler, Calvin Grewall, who had moved up to fill in for the normal Varsity starter, pancaked his opponent and got the pin. Gunn 18, Paly 14. The next three Paly wrestlers pinned their matches and suddenly it was 32 to 18, Paly.

Junior Emil Wolfgram prepared to clinch the dual with his 160 pound weight class match. After the Cupertino loss, Creighton had told him his performance was “pathetic.” I love you and I will give you the shirt off my back, Creighton had said, but you can’t ever do that again. You’ve got to wrestle. Wolfgram went on to score takedown after takedown, getting the technical win to seal victory for Paly.

The win over Gunn may have been an improbable one, but perhaps in the future it will not be. Creighton knew how to turn himself into a champion, and he knows how to do that for others. Recently, the two girls on the team, junior Sarah Aguilar and senior Alexa Austin, won the Central Coast Section Championships.