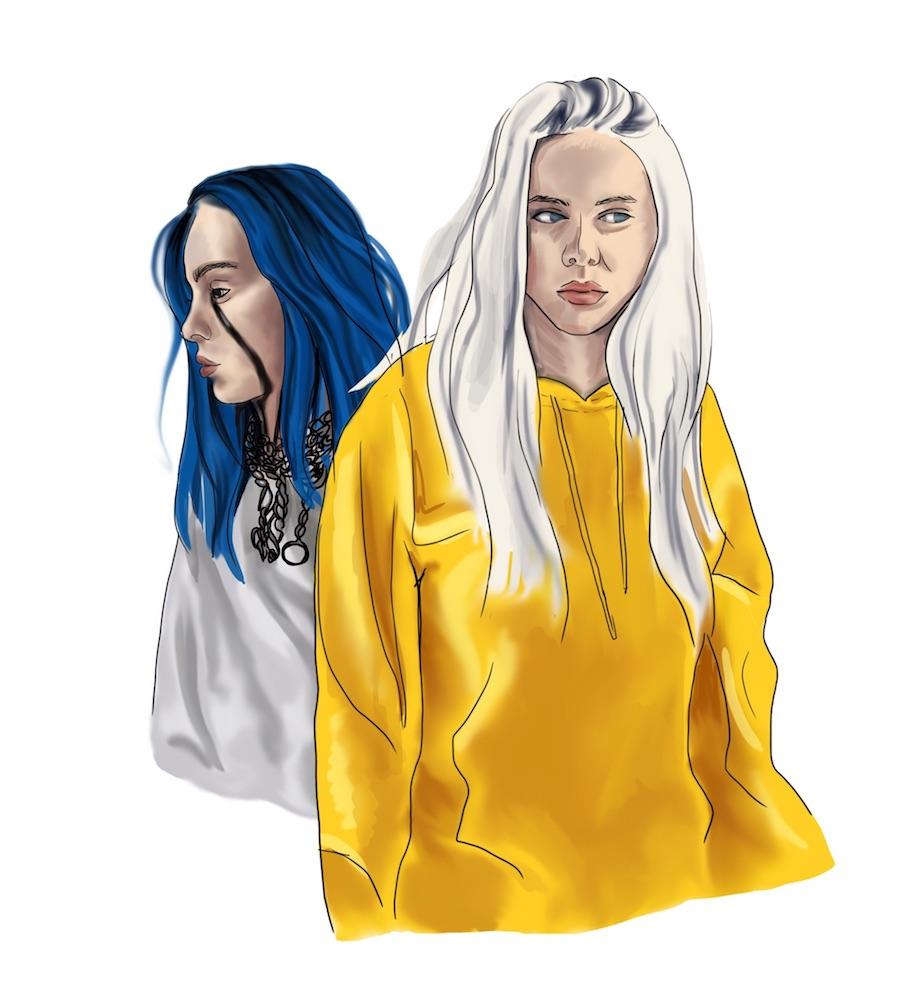 “The world sucks and fame is trash.” These are the words of teen pop phenomenon Billie Eilish in a recent interview with music news YouTube channel 3voor12. Reclining on a couch in an oversized black sweatshirt, beanie and thick chain necklaces — all signature elements of the artist’s eccentric, intentionally contradictory style — Eilish appears very much in her element as she discusses her music.

Still, the interview quickly takes a turn into what feels almost like a therapy session. Eilish is both jarringly defeatist and brutally honest as she speaks about how the toll of the music industry, fame and the world at large caused her to grow up too fast. Referring to the lyrics of her Feb. 26 single “when the party’s over,” Eilish quips that she does indeed “know too much already.”

And it’s perhaps by this token that Eilish has managed to attract such a devoted following of teens, including those at Palo Alto High School, many of whom relate to the artist in age and angst.

For example, junior Gracia Hmelar first discovered Eilish at a free, 40-person concert at an Apple store in San Francisco two years ago. Last summer, after Eilish’s popularity had skyrocketed, Hmelar saw her again — this time in a huge crowd at Outside Lands Music Festival.

“Her music is … a lot sadder now,” Hmelar says. “It’s a reflection of what she’s gone through from getting famous so quickly. The tune is really upbeat but then you’re like, ‘Oh, this is really depressing actually.’”

Though just 17 years old, Eilish seems to have lived a lifetime. She rarely appears happy in photos and frequently sings, talks and tweets about depression and what she perceives to be the lack of meaning in life. She’s part of a vanguard of popular artists who use their platforms — which inevitably reach millions of teens — to expand the conversation surrounding mental health.

Still, some worry that Eilish has not carried out this conversation with enough tact to prove constructive, and has instead contributed to the romanticization of mental illness and death in pop music.

“The tune is really upbeat but then you’re like, ‘Oh, this is really depressing, actually.’”

After last year’s release of “lovely,” Eilish’s collaboration with singer-songwriter Khalid, The Daily Telegraph accused Eilish of promoting so-called “misery music” and called the resurgence of emo lyrics “deeply concerning.” The song, which was featured on the soundtrack of “13 Reasons Why,” the controversial Netflix drama about teen suicide, leaves little room for resolution or hope. “Isn’t it lovely, all alone? / Heart made of glass, my mind of stone,” Eilish sings over fading sounds of a violin, pulling at the heartstrings.

Sophomore Rachel Owens, however, disagrees with The Telegraph’s criticism, saying Eilish’s music is a net positive since it gives mental health a platform.

“Just by … putting that media out into the world, she [Eilish] is reducing the stigma around mental illnesses such as depression,” Owens says. “People know that they’re not alone because they hear someone else in the mainstream media talking about it and singing about it. It helps people to understand and express what they’re feeling when they themselves might not be able to.”

When we all fall asleep, where do we go?

There is no doubt that Eilish’s hits push the envelope of the pop genre further each year. Among her more recent releases is “bury a friend,” a haunting single written from the perspective of the monster under her bed — a personification of the anxiety, depression and evil thoughts that reside in her head. The music video, created in a sinister monochromatic theme, is the stuff of nightmares; Eilish literally embodies a monster while gloved hands tug at her face, hair and shirt and inject her back with syringes. Still, the song is effortlessly catchy. A muffled, rumbling beat layers over Eilish’s melodic but lethargic voice, mimicking a monster prepared to pounce. The verses are interrupted periodically by screams — a chilling reminder that this is not your typical lighthearted pop song.

Eilish likewise subverts expectations in “wish you were gay,” another pre-released song from her March debut album titled “WHEN WE ALL FALL ASLEEP, WHERE DO WE GO?” The song begins acoustic, carried by Eilish’s voice — soft and trembling, like it’s about to crumble. The heavy beats come in for the refrain as Eilish sings, “I just wanna make you feel okay / But all you do is look the other way.” As she laments an unrequited love, she hopes it was because of the man’s sexual orientation and not because of her personally. It’s through songs like “wish you were gay” that Eilish hopes to connect viscerally with her young and diverse audience.

Don’t smile at me

Similar to “wish you were gay” and “bury a friend” in its melancholic sound but lighter lyrically is “ocean eyes.” A dreamy, lullaby-like ballad, it’s essential to any chill, sad song playlist. Like all of her later work, Eilish wrote and produced the song with her older brother, Finneas O’Connell.

Although initially released in 2015 via SoundCloud, “ocean eyes” is featured on Eilish’s hugely successful 2017 EP “don’t smile at me.” From start to finish, this EP embodies Eilish’s ambition as a rising pop sensation. The opening track, “COPYCAT,” exudes confidence, evident in the all-caps title and lyrics like “I don’t belong to anyone, but everybody knows my name.” The song was written in response to imitations of Eilish’s mannerisms. Despite Eilish’s soft and soothing voice, she conveys a threatening message to warn the person they’ve crossed the line.

One of the most masterful songs on the album is “bellyache.” This time Eilish assumes the persona of a psychopath who’s killed her friends and dumped their bodies in the “back of the car.” While “ocean eyes” earned Eilish comparisons to indie-pop darlings Lana Del Rey and Lorde, “bellyache” breaks new ground — an impressive feat for a young female singer. It’s avant-garde songs like this one that cement Eilish as a mature young artist unapologetic in her vision, quickly reaching new heights.